Failure to end investment ‘would be a betrayal against life itself’, say climate activists

Greta Thunberg and others: ‘At Davos, we will tell the tycoons to dismantle the fossil fuel economy’

Greta Thunberg and fellow youth climate campaigners are demanding that global leaders immediately end the “madness” of huge ongoing investments in fossil fuel exploration and enormous subsidies for coal, oil and gas use.

The 21 young activists are also calling on the political and business leaders who will be attending the World Economic Forum in Davos to ensure investment funds dump their holdings in fossil fuel companies.

“Anything less would be a betrayal against life itself,” said Thunberg and colleagues in an article in the Guardian. “Today’s business as usual is turning into a crime against humanity. We demand that you play your part in putting an end to this madness.”

The burning of fossil fuels is the biggest driver of the climate emergency. Scientists predict catastrophic impacts unless deep cuts in emissions are made rapidly, but global emissions are still rising.

“Young people are being let down by older generations and those in power,” the climate strikers said. “To some it may seem like we are asking for a lot. But this is just the very minimum effort needed to start the rapid sustainable transition.”

Much of the world’s existing coal, oil and gas reserves must be kept in the ground to avoid the worst impacts of global heating. But investment in fossil fuel exploration and extraction remains high.

Since the Paris climate agreement in 2015, the world’s largest investment banks have provided more than $700bn (£535bn) to fossil fuel companies to develop new projects, with the total investment estimated to be trillions of dollars. Fossil fuel companies argue that their products will be used for many years to come and that they have a pivotal role in shifting the energy system to zero emissions. But their investments in green energy are tiny compared with those in fossil fuels.

Subsidies for fossil fuels also remain high despite a G20 pledge in 2009 to eliminate them. The IMF estimates such subsidies run at $10m a minute, or $5.2tn a year. “The fact that [ending investment and subsidies] hasn’t been done already is, quite frankly, a disgrace,” said Thunberg and colleagues. 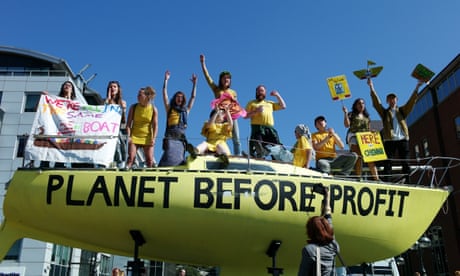 Investors managing funds totalling $12tn have already divested from coal, oil and gas, but the climate activists demand that “all companies, banks, institutions and governments immediately and completely divest from fossil fuels”.

Mark Carney, the governor of the Bank of England, said in December that the financial sector was not cutting investments in oil and gas companies rapidly enough and warned that assets in the sector could end up “worthless”. He said in October that companies and industries not moving towards zero-carbon emissions would be punished by investors and go bankrupt.

“It ought to be in every company and stakeholder’s interest to make sure that the planet they live on will thrive,” said the climate strikers, who come from nations across the world, including the US, Australia, Brazil, Russia, India and Nigeria. “But history has not shown the corporate world’s willingness to hold themselves accountable. So it falls on us, the children, to do that.”

The agenda for the 50th annual meeting of the World Economic Forum, which begins on 20 January in Switzerland, lists four “urgent and important” global issues. The first is “how to address the urgent climate and environmental challenges that are harming our ecology and economy”.

The climate strikers said: “The world’s leaders should invest their money in existing sustainable technologies, research and in restoring nature. Short-term profit should not trump long-term stability of life.”

As the climate crisis escalates...

… the Guardian will not stay quiet. This is our pledge: we will continue to give global heating, wildlife extinction and pollution the urgent attention and prominence they demand. The Guardian recognises the climate emergency as the defining issue of our times.

You've read 12 articles in the last four months. We chose a different approach: to keep Guardian journalism open for all. We don't have a paywall because we believe everyone deserves access to factual information, regardless of where they live or what they can afford to pay.

Our editorial independence means we are free to investigate and challenge inaction by those in power. We will inform our readers about threats to the environment based on scientific facts, not driven by commercial or political interests. And we have made several important changes to our style guide to ensure the language we use accurately reflects the environmental catastrophe.

The Guardian believes that the problems we face on the climate crisis are systemic and that fundamental societal change is needed. We will keep reporting on the efforts of individuals and communities around the world who are fearlessly taking a stand for future generations and the preservation of human life on earth. We want their stories to inspire hope. We will also report back on our own progress as an organisation, as we take important steps to address our impact on the environment.

We hope you will consider supporting us today. We need your support to keep delivering quality journalism that’s open and independent. Every reader contribution, however big or small, is so valuable.